Whatever good you do to your neighbour will be in proportion to the interior spirit that accompany your words and actions.

The story of Bakhita begins in a village of Darfur, called Olgossa, near the Agilerei Mountain. The members of her family were united by great love and spontaneous solidarity. They belonged to the Dagiu’ Tribe who have a great tradition for being peaceful and hardworking people. She was born the most probabaly around 1869 into this well-off family who owned vast plantations and numerous heads of cattle. She had a lovely family: three boys and three girls, two of whom were twins.

Bakhita was about five years old when, one afternoon her mother brought her to the fields. Only the eldest daughter and her twin sister remained at home. The eldest was preparing the supper while the little one jumped about like an elf. There was an atmosphere of peace and serenity throughout the village.

A SHOUT SHATTERS THE SILENCE

Suddenly the shout of alarm and terror interrupped the rhythmic thump of the hammers in the mortars and the happy voices of the children running about among the huts. “The slave traders! The slave traders!” Everyone in the village tried to find an escape. Bakhita’s little sister clung instinctively to her eldest sister who struggled free with a rapid move and hid her behind a riuned hut and then tried to save herself by running away. However, she had only gone a few steps when wild and violent men jumped on her as quick as lightning. They bound her wrists behind her back and led her away together with other young men and women whom they had surprised in the houses and nearby fields.
The beloved firstborn daughter of this respected family was lost forever.. For the whole of her life Bakhita would repeat: “how much my mother cried and how much we did, too”.

Two years passed after that unforgettable afternoon. The twins had now turned eight. One day Bakhita left the village with a friend. They were going to a big field which was really green at that season. All of a sudden they fell silent. Two armed strangers appeared from nowhere and were walking towards them. Surprised and frightened they clung to each other as though they were trying to protect each other. The two men were now close. As they approached the children the first one smiled and said kindly, “don’t be afraid”, while the other one accompanied the words with inviting gestures.
“One of them turned to my friend said, ‘Let this little one run to fetch a parcel for me from over there near those bushes. You can go on your way and she will catch up with you immediately’. Bakhita hastened to obey and ran to search around the bushes at the edge of the forest, but… there was no parcel in sight. She was still intent on her search when she was roughly grabbed by the shoulders. Bakhita relates: “I was petrified with fear. I trembled from head to foot and tried to shout out, but a lump in my troat prevented me”. ‘If you shout you are dead’, threatened one of them taking a knife menacingly from his belt. The other one urged me to walk quickly while he pointed the barrel of his gun at my back”.

The forced walk lasted all night. When they arrived at a camp the two men finally stopped. There were cucumbers there, so they picked some and split them with their knives. As they sat in front of their victim, they threw her a piece to eat, but the child could eat nothing. Sobbing all the time she turned one from one to the ither asking for mercy. The two exchanged meaningful looks and then said: “What shall we call this child?”. “Let’s call her Bakhita” suggested the other and added: “Bakhita is a beautiful name: it will bring you luck”. So the kidnappers as a joke called her “Bakhita” what means in arabic “happy – lucky woman”.

At sunrise, the two men, with Bakhita, who was now a slave, reached their village and put her into a hut full of tools and scarp iron and locked the door. Bakhita relates: “What a suffered in that place can never be put into words. I only remember those hours of anguish and how, when I was wornout from crying, I fell exhausted on a mat in a light torpor in which my imagination took me far away to my loved ones. I saw my parents, brothers, sisters and I hugged them all, tenderly, telling them how they had kidnapped me and how much I had suffered”…  But alas, I awoke to the crude reality of that immense solitude and I was gripped by a sense of dismay; it was as if my heart were breaking”. Her staying in that airless prison with very little light, lasted for more than a month.

She was selt and reselt more times in the way to El Obeid and in Chartum, during the years of being slave she had known too well the anguishes of slavery that means continue moral and physical humiliations. Their proprietors  flogged her for nothing. The crudel remember of those years remained on her body the tattoo.   It was cut out wiht a razos on the body of slave and the fresh wounds strewed with the salt…
The hope to the change of this tragic situation changed when the young slave Bakhita was bought by an italian console Callisto Legnani. For the first time of the kidnapping she had proved a human treatment. No more suffer  of the beating. On the contrary, in the house of Sir Legnani she enjoyed the people’s goodness and the peacefullness of the surroundings.

ITALY ON THE HORRIZON

Two years went by and than everything was drusquely interrupted. The vice consul had, of necessity, to leave the capital immediately and return in Italy. When Bakhita found out, she felt un unbridled urge to see the country she had dreamed of so much: but how could she dare to ask the consul to take her with him? Bakhita’s desire got the better of her, and she overcme her timidity and went to the consul to beg him to take her  to Italy.
The consul couldn’t manage to understand this strange desire which the little black girl had, now how she found the courage to keep insisting. She was usually so timid and compliant. In the end the consul agreed.

After a long and dangerous journey across Sudan, the Red Sea, and the Mediterranean, they arrived in Italy. She was given away to another family of friend of consul, Augusto Michieli, as a gift and she served them as a nanny.

Her new family also had dealings in Sudan had when her mistress decided to travel to Sudan without Josephine, she placed her in the custody of the Canossian Sisters in Venice, together with her daughter Mimmina for whom Bakhita was not only the nanny but also the best friend.

While Bakhita was in the custody of the sisters, she came to learn about God. According to Josephine, she had always known about God, who created all things, but she did not know who He was. The sisters answered her questions. She was deeply moved by her time with the sisters and discerned a call to follow Christ.

When her mistress returned from Sudan, Josephine refused to leave. Her mistress spent three days trying to persuade her to leave the sisters, but Josephine remained steadfast. This caused the superior of the institute for baptismal candidates among the sisters to complain to Italian authorities on Josephine’s behalf. The case went to court, and the court found that slavery had been outlawed in Sudan before Josephine was born, so she could not be lawfully made slave. She was declared free.

For the first time in her life, Josephine was free and could choose what to do with her life. She chose to remain with the Canossian Sisters.

She was baptized on January 9, 1890 and took the name Josephine Margaret and Fortunata. (Fortunata is the Latin translation for her Arabic name, Bakhita). She also received the sacraments of her first holy communion and confirmation on the same day. These three sacraments are the sacraments of initiation into the Church and were always given together in the early Church. The Archbishop who gave her the sacraments was none other than Giusseppe Sarto, the Cardinal Patriarch of Venice, who would later become Pope Pius X.

Josephine took her final vows as a nun in the Institute of Canossian Daughters of Charity, on August 10, 1927.  In the same time became in fullness a spiritual daughter of saint Magdalene di Canossa.

She was eventually assigned to a convent in Schio, Vicenza.

For the next 42 years of her life, she worked as a cook and a doorkeeper at the convent. She also traveled and visited other convents telling her story to other sisters and preparing them for work in Africa.

She was known for her gentle voice and smile. She was gentle and charismatic, and was often referred to lovingly as the “little brown sister” or honorably as the “black mother.”

When speaking of her enslavement, she often professed she would thank her kidnappers. For had she not been kidnapped, she might never have come to know Jesus Christ and entered His Church.

During World War II, the people of the village of Schio regarded her as their protector. And although bombs fell on their village, not one citizen died.

In her later years, she began to suffer physical pain and was forced to use a wheelchair. But she always remained cheerful. If anyone asked her how she was, she would reply, “As the master desires.”

On the evening of February 8, 1947, Josephine spoke her last words, “Our Lady, Our Lady!” She then died. Her body lay on display for three days afterwards.

In 1958, the process of canonization began for Josephine under Pope John XXIII. On December 1st, 1978, Pope John Paul II declared her venerable. Sadly, the news of her beatification in 1992 was censored in Sudan. But just nine months later, Pope John Paul II visited Sudan and honored her publicly. He canonized her on October 1, 2000.

Saint Josephine Bakhita is the patron saint of Sudan and her feast day is celebrated on February 8. 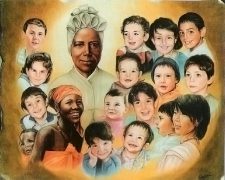